What is now known as political liberalism—though having its roots in the works of Thomas Hobbes (1588-1679), John Locke (1632-1704), Jean-Jacques Rousseau (1712-1778), Immanuel Kant (1724-1804), and John Stuart Mill (1806-1873)—is of fairly recent origin. Its point, according to its most important advocate, John Rawls (1921-2002), is to provide an answer to this problem: “How is it possible that there may exist over time a stable and just society of free and equal citizens profoundly divided by reasonable religious, philosophical, and moral doctrines?” According to Rawls, this state of deep disagreement in which America has found itself since the middle of the 20th century is precisely what one should expect in a free and open society.

The contours of these disagreements begin to arise most profoundly in the late 1960s and early 1970s as certain segments of American society begin to question whether traditional understandings of human life, death, and sexuality should be reflected in the nation’s laws. Prior to the mid-1960s, abortion, fornication (including homosexual conduct), contraception, euthanasia, and pornography were proscribed under the criminal law throughout the United States.

As many (though not all) of these laws began to gradually vanish over time by way of a series of U.S. Supreme Court opinions and state legislative actions, several influential philosophers increasingly provided the intellectual heft to justify these sweeping changes in American jurisprudence. These thinkers include Rawls, Ronald Dworkin (1931-2013), Thomas Nagel (1937- ), Judith Jarvis Thomson (1929- ), and many others. What they offered was a particular account of liberty that appealed to a kind of epistemic modesty. They argued that on those issues that touch on fundamental questions of the human good, there are a variety of reasonable, though contrary, “comprehensive doctrines,” as Rawls would say. And for this reason, it would be unjust to coerce one’s fellow citizens based on any one of these doctrines. This is why Nagel distinguished “between what justifies individual belief and what justifies appealing to that belief in support of the exercise of political power.” Or as Dworkin put it, “A tolerant secular society…. could have no reason for embracing freedom of orthodox worship without also embracing freedom of choice in all ethical matters and therefore freedom of choice with respect to the ethical values that are plainly implicated in decisions about sexual conduct, marriage, and procreation.”

This sort of thinking dominated the way in which most liberal philosophers and jurists assessed coercive laws that enforced a traditional moral position.  The strategy was to first claim epistemic modesty—e.g., “too many really smart people armed with good reasons from established and well-respected but different moral traditions disagree on this matter”—and then to make the further claim that in such a state of profound, sincere, and irreconcilable disagreement the state should err on the side of liberty.  Thus, for the political liberal, the traditional moralist may be both right and in the majority, but she has no justification to legally coerce others to conform to her views.

However, in the past decade or so this political liberalism has developed into what I call hegemonic liberalism, a view that seems to eschew the epistemic modesty of its predecessor—political liberalism—while emulating the project of the traditional moralist.

For the political liberal, the government should not only restrain its hand on matters of moral controversy, it should in some cases go out of its way to offer exemptions to generally applicable laws to idiosyncratic sects for the sake of civic peace (e.g. conscientious exemption statutes, Wisconsin v. Yoder, Sherbert v. Verner). But for the hegemonic liberal, the role of the state is to make men moral, as he understands morality. It is to scrupulously enforce “social justice” by direct coercion of the actions, speech, and private associations of those who remain unconvinced of the wisdom of the left side of the culture war. So, for example, the Little Sisters of the Poor must assist in providing contraception contrary to their Church’s teachings, a Christian baker must use her talents to help celebrate what she believes is a faux liturgical event or face crippling fines, and a religious college may have to set aside its moral theology or be singled out for special retribution by the government.

What does all this have to do with the future of Christian higher education? Plenty. For we are at a crucial time in our nation’s history in which more of our fellow citizens identify with the ideals of political liberalism than they do with the traditional moral beliefs of the Christian faith.  However, most have not joined the project of hegemonic liberalism—at least not yet. So, if a Christian college or university wants to preserve the integrity of its academic mission—including the task of moral formation—it has to be prepared to employ the resources of political liberalism to its advantage: “be as wise as serpents, innocent as doves” (Mt. 10:16).

It is clear to many of us that liberalism has won the culture war, and that traditional Christian moral theology is considered by an ever-increasing number of our fellow citizens to be seriously mistaken on a variety of questions, especially on sexual morality. Nevertheless, for the genuine political liberal, this provides no justification for the government to employ its coercive power to punish dissenting citizens and interfere with the religious missions of their academic institutions. As that quintessential political liberal Justice Robert Jackson once put it: “If there is any fixed star in our constitutional constellation, it is that no official, high or petty, can prescribe what shall be orthodox in politics, nationalism, religion, or other matters of opinion, or force citizens to confess by word or act their faith therein. If there are any circumstances which permit an exception, they do not now occur to us.”

Francis J. Beckwith is the 2016-17 Visiting Professor of Conservative Thought & Policy at the University of Colorado, Boulder as well as Professor of Philosophy and Church-State Studies at Baylor University. He is the author of Taking Rites Seriously: Law, Politics, and the Reasonableness of Faith (Cambridge, 2015), winner of the American Academy of Religion’s 2016 Book Award for Excellence in the Study of Religion in the category of Constructive-Reflective Studies 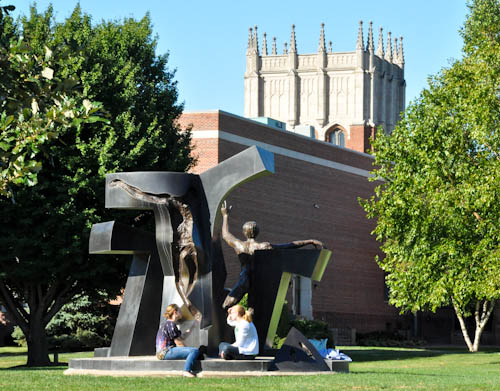